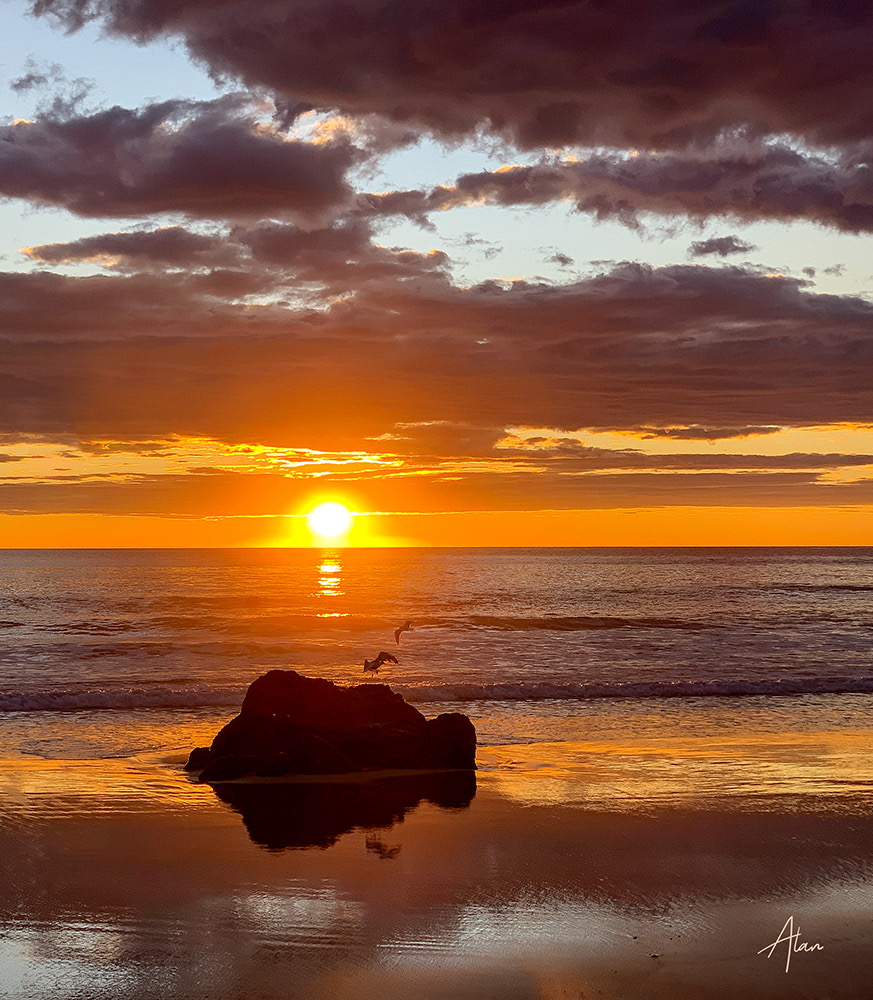 Photo by Alan Nichol ~ Sunrise over Dolphin Beach, Moruya Heads, NSW Australia the morning of the day of our arrival for six weeks of coastal isolation

Reflections on Isolating in a Strange (Home)Land

Why did we move to Lansing again? Oh, right! The GOPpers took the Gov to court for abuse of power over some of her mandates. They are pro-life, but not pro-health, remember. This happened the day before my last post. Unsurprisingly, COVID has wracked this state just as it has our neighboring states. So, we have been isolating even more than we did in October.

October seems like a far-away memory today. Earlier in September, we three Kirbys read We Are All Greta. Earlier this year, which really was another life, we read Malala: My Story of Standing Up for Girls’ Rights. My partner and I are painfully aware that we are raising yet another white male, but we are raising him far differently than we were raised. It works for us and it’s important for him to understand and acknowledge this privilege.

Anyway, October was the ‘Water Challenge Walk’ month, where we set a goal to walk an average of 7k a day. Why 7? Well, 7kms is the average distance a girl will walk in a day in some countries to get water for the family. The girls do this while the men and boys go to work and school. So, girls, once again, miss out on the opportunity of an education. This is the lesson we spoke about nearly every walk, How lucky were we to do this for exercise and enjoyment, rather than for necessity? We met our goal and we learned how much time all of that walking takes in a day…and we did not carry water back home.

But now November has passed into December. We noticed early in November that we were coming into contact with more and more people, mostly unmasked, out walking. We tried different times, etc, but now we mostly stay in. Once it gets colder, perhaps fewer people will be out and we can get back to some walks…we shall see.

Covid will only get worse, so we are literally inside for the duration (thank goddess for our balcony!) because far too many of my compatriots view mask-wearing as a political statement. Well done, y’all.

From Ojibwa Land: Michigan proved to be lovely. Our friends, who are also isolating, opened their home to us; their parents lent us a huge camper to stay in for nearly a month. Our friends have two children, just a little younger than little Kirby. Once we arrived, we got tested for Covid (thank you very much CVS for making it an easy process in the drive through!); once we were clear, it was so nice for everyone to play together without worry. So, we are ‘podding’ with them.

Although our initial plans were to winter in Texas, Covid was/is too rampant and risky. We’ve opted to stay, as Michigan has done better than most, thanks to a wise Gov. Witmer. We have literally stayed because it’s the only place where little Kirby can play with other kids. So, we’re wintering in the Lansing area and meet up about once a week or so for the children to have a play.

Reflections on Returning & Isolating in a Strange (Home)Land

From Ojibwa Land: Many thanks to the many of you out there asking about how we three Kirbys have been. We departed “Hampton House” on 17 July 2020 but needed more time in Hampton Roads. We put our van in the shop to prevent any issues on our massive road trip…turns out electronic sensors were screaming all over the place.

Four nights in Williamsburg later, we depart for the beautiful Shenandoah National Forest 2000 feet up to camp…really camp, by a stream for five days. We are living ‘that van life’. We’ve learned we’re carrying far too much to live that life for too long! So…

Reflections on Quarantining in a Strange (Home)Land

From Powhatan Land: I cannot believe we three Kirbys are nearly 1.5 weeks out of our quarantine. Our isolation here in Hampton Roads, Virginia, requires us to get out a bit more than it did at our old house & our friend’s granny flat in March/April in Albury, NSW, and glamping across the road from the beach from mid April to the end of May on the South Coast of New South Wales, Australia.

If you have to quaratine, being jet lagged is the way to do it! With the help of grocery delivery and a few amazing friends who would drop things off on the front stoop as we shouted through the glass front screen door.

We rented a house in Hampton through AirB&B for 5 June-17 July 2020. We affectionately call this special little dirty house that we made clean our “Hampton House” and thoroughly enjoyed living in a more diverse and safe neighborhood than we had previously left in Albury, New South Wales, Australia.

Instacart can be one’s best friend, or as is the case of one delivery around noon on 18 June 2020 (that I did report) Instacart can show up, tell you He “doesn’t need this fucking bullshit”, scans his own ID for my Sauv Blanc and storms off hurling expletives…not towards me but at me…but very violent and aggressive…as I reported. Of course, I’ve heard nothing back from Instacart since I called in my concerns immediately afterwards. My crime? Having an Australian Driver’s License and a US Passport for ID to prove I am over 21 to purchase wine. I’m a total badass 😉 As is most of the world, by his standards…what with an ID that doesn’t have a scannable barcode on the back, thereby forcing him to use more finger energy to input my data than for other things. White male privilege at its finest!

International Flying in the Time of Covid19

One week ago, on Friday 5 June 2020, we were compelled to depart home, Australia, where we were temporary residents for a decade, for the US, where we are citizens. We being myself, my partner, there since January 2010, and our 8 year old son, who was born on Ngunnawal land in the Canberra Birth Centre December 2011.

In Australia, our travel was deemed ‘essential’ since we were at the end of our visa and there was no ability to stay. Prime Minister Scotty was clear…he wanted those of us on temporary visas to ‘go home’. Well, okay, if we must. And since I had the (mis)fortune of working for two, not one, unethical universities that dangled Permanent Residency in one way or another.

QF93, a non-stop 14 hour 15 minute Qantas flight from Melbourne, Australia to Los Angeles, California. Services would be limited, as this was the last of the announced ‘repatriation flights’. Before Melbourne, we had flown the day before from Canberra, the capital of Australia. There were three flights on the board, two outbound and one inbound. But in Melbourne, we were the only flight that was checking in, having our temperature taken, filling in forms for contract tracing, clearing security and customs. The only flight.

We had already donned our surgical masks and our temperatures were normal; we had done the required online forms 48 hours before our flight. We were cleared to fly. For Australian citizens and Permanent Residents, they had to make an application to DFAT (Dept of Foreign Affairs & Trade) as to why their travel was deemed ‘Essential’.

Once on the plane, appropriately masked flight crew greeted us and made efforts to socially distance. We were handed a biocontaminate bag with several other bags, a dozen or so surgical masks, and a bottle of hand sanitiser. Our family of three were given 5 seats of space pre-boarding. Once aboard, we three had two rows of three seats. Most rows of three had two people to them. Water was brought around, dinner after a bit. Of course, the usual wine with dinner and coffee or tea afterwards was abandoned (I expected the wine, but the tea?!!?).

The flight was a 14 hour flight…none of the in-flight entertainment was available, which we knew and so were prepared. We deplaned in LAX and cleared customs. We were not prepared, however, for what we saw once we emerged from Baggage Claim out into the terminal to exit and go to Terminal 4 to catch American Air flight 1925 to Charlotte and then AA5034 on to Norfolk, Virginia.

The contrast was stark.

Did these Americans really not understand what was going on? Some of them had a masked looped over one ear, several were wearing masks, more yet had masks over their mouths. Why were there so many people in a domestic terminal? Where could they all be going?
As I looked at the gate screens, I noticed they were going everywhere: Chicago, Illinois, Myrtle Beach, South Carolina, Oakland, California, and of course, Charlotte, North Carolina.

My heart sank. We certainly weren’t in Australia anymore. It was clear to me that I was not over-reacting in purchasing N95 masks for the cross-country flights.

And why were so many of the people not wearing masks white and male?

Going from Australia, which took Covid-19 fairly seriously despite the leadership, to the USA, where the leadership fought hard to deny its very existence ::insert facepalm here::

So as we bring our first week of self-imposed quarantine here in Hampton Roads, Virginia, the US has had over 2 million cases of Covid-19 and over 116,000 people die. The chasms between rich and poor are exposed. The US’ need to dismantle the systems built for a few have never been stronger. It is time for the US to rise and meet its creed. I’ll be out there, too…after my quarantine…with my mask on and being as responsible as I can with distancing.

But please, stay away from airports and avoid all non-essential air travel.

Q: Why did you leave a tenure-track job mid 2016 when you had a letter from HR stating you were likely to make Associate Professor within a couple of years, from 2018/19, provided you met certain conditions?

A: As I value authenticity & openness, here is my response: Upon my final Assistant Professor review, I was offered a contract extension, Permanent Residency in Australia (my dream at the time), as well as the opportunity to run a future university/schools partnership. However, the past 6.5 years had taken a toll on my family, my marriage and me. My husband and I separated for two years towards the end of my time in my first academic position. I could not fathom remaining there and continuing to allow myself to be sexually harassed and bullied by my superiors while HR stood by and did nothing.

JFK’s next to last telephone call on November 22, 1963, before his assassination, was to Uvalde, Texas, with ninety-fifth birthday wishes to the town’s most famous citizen, FDR’s two-term Vice President, John Nance Garner.

"No one - no matter where he lives or what he does - can be certain who will suffer from some senseless act of bloodshed. And yet it goes on and on. Why?”
--Robert Kennedy, Cleveland, April 5, 1968

Indigenous issues are not ‘Left issues’ they are Australian issues.